A Comparison of ArrowCreek and Other Reno Development HOA Fees

By Ben Collins
Reprinted with Permission

A detailed analysis follows.   However, two predicates need to be identified.  First, developers control the homeowners associations until more than 50% of the homes are developed.   At some point, the association is turned over to the homeowners.  As long as the developer controls the associations, the monthly fees are likely to be unrealistically low, particularly with regard to necessary Reserves.  See discussions included in the references at the end of this document.  Indeed, when the ArrowCreek homeowners took over the HOA from the developer, they found that the roads were in bad shape and that reserves were seriously underfunded.  ArrowCreek residents actually filed an action against the developer due to the underfunding. Research suggests that the underestimating of monthly fees by developers is often more than 50%.  For that reason, care must be used when reviewing data from associations that remain under a developer’s control.

Second, analysis needs to compare apples to apples.  Each development is different.  Homeowners value different things.  If a homeowner values gated security, swimming pools, a Clubhouse, tennis courts and a golf course that runs through the community creating green space and great views, there is no question that ArrowCreek is a deal.  If a homeowner specifically values the tapestry created by the colors and shapes of moving clouds, then ArrowCreek is unparalleled.  If a homeowner does not value those specific amenities, then other associations are more attractive.  The following analysis attempts to include a broad analysis.

To compare the dues of ArrowCreek with that of other HOAs in Reno, a list of the amenities available at or near sixteen Reno Developments was assembled.  Seventeen amenities, including “size” of home, presence of trails and who owns the HOA for each Development were collected on an Excel Spreadsheet.  Numerical values for each amenity were assigned using the method shown on the spreadsheet.  These numbers were added together for a “Score” for each Development.

The “Score” for each Development was then plotted against the HOA dues for that Development to give a graph of HOA Dues vs Amenities (“Score”).  The first graph below shows that ArrowCreek compares favorably to Montreux, St. James and Somersett.

Ten of the sixteen developments’ Home Owners Associations are still owned by the Developer.  It is common practice for a Developer to keep the HOA dues low to attract buyers. (References below)  When the Developer turns the HOA over to the homeowners, the HOA dues will likely increase.  I estimated this increase from various sources including ArrowCreek’s.  The “Corrected” HOA dues plotted against the Amenities “Score” shows ArrowCreek’s HOA dues relative to our amenities are strikingly favorable to all other developments in Reno as shown in the second graph below.

The graphs suggest that Montreux and St. James are comparable to ArrowCreek.  This requires more analysis because neither development includes amenities in their HOA dues.  If you add the cost of Montreux’s Sports Club into both HOA’s dues, the dues are just south of $600 per month—and that does not include the $24,500 initiation fee to join the Montreux Sports Club.

A critic of the handling of the raw data might take issue with using “Recent Price” (asking price) rather than selling price.  The only effect of that change would be to move all “Score” values slightly lower.  It would not affect the relative positions of the Developments.

A critic could also take umbrage with my derivation of numbers for square footage and price as not being representative of all “sales” and lot size in the development.  The absolute number might vary by several percentage points, but because I used the same method in each Development, the relative positions of the points would not change.

Another potential issue might be my assigning numbers to the value of a Gated community, Clubhouse, tennis courts, etc.  Those numbers are an attempt to incorporate the importance that ArrowCreek surveys have place on those amenities.  One could say that a fitness center has no importance to a specific person and that only tennis courts are what he or she wants.  To test that, I reduced all Clubhouse numbers to zero and raised all Tennis numbers to 500.  The resulting graph was compressed down but did not change the relative positions of the points.

The importance of a Clubhouse to potential buyer is shown by Google Earth.  In 1990, the Caughlin Club was fully established and about 75 of its 2,300 houses had been build.  ArrowCreek and Montreux had not been started.  By September of 1999, the ArrowCreek Residents Center and all its amenities were complete. The Golf Course, with all its buildings and playing grounds were complete. Less than 90 homes had been build.  At the same time, Montreux had completed its clubhouse and golf course while less than 20 home had been built.  At Somerset, the golf courses and Town Center had been built or partly built by November of 2004, well before the greatest number of homes were completed.  The first buildings to go up at The Presidio at Demonte Ranch in 2014 were the club houses.  The history of the Hidden Valley development includes this:  “With the completion of the clubhouse, golf course and a few homes along Piping Rock, the residential pattern and distinction of living in Hidden Valley began to be recognized.”   https://hiddenvalleyhomeowners.com/history-of-hidden-valley-2/

Those people who only want to pay for those amenities they use had ample opportunity to investigate ArrowCreek and all the other communities in Reno before choosing to buy in ArrowCreek.  ArrowCreek has not altered its offering.

If you have comments with the material presented here, please suggest improvements as critique without improvement helps no one.

All data and graphs are available from Benjaminicoll@charter.net 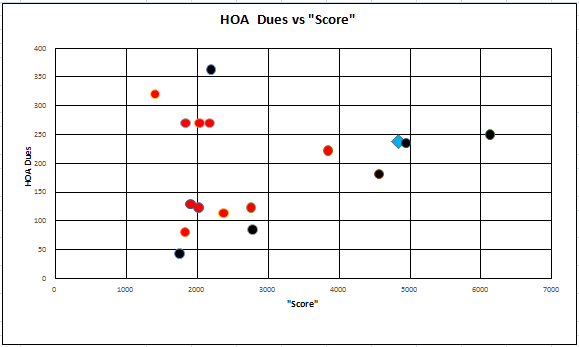 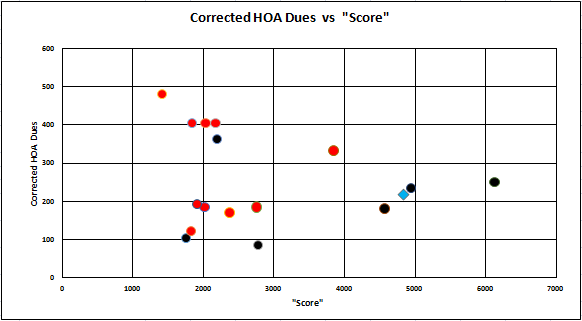 Montreux: $24.5K Initiation Fee+$338/mo + rolling 1 year contract.
Somerset: “On-site visits and interviews with staff confirmed that the cardio fitness area is crowded with machined which makes the space undesirable, and possible unsafe. The cardio room experiences peak usage during the morning hours before work and after-work hours, Residents are using private gyms elsewhere in Reno to exercise during these peak hours.”